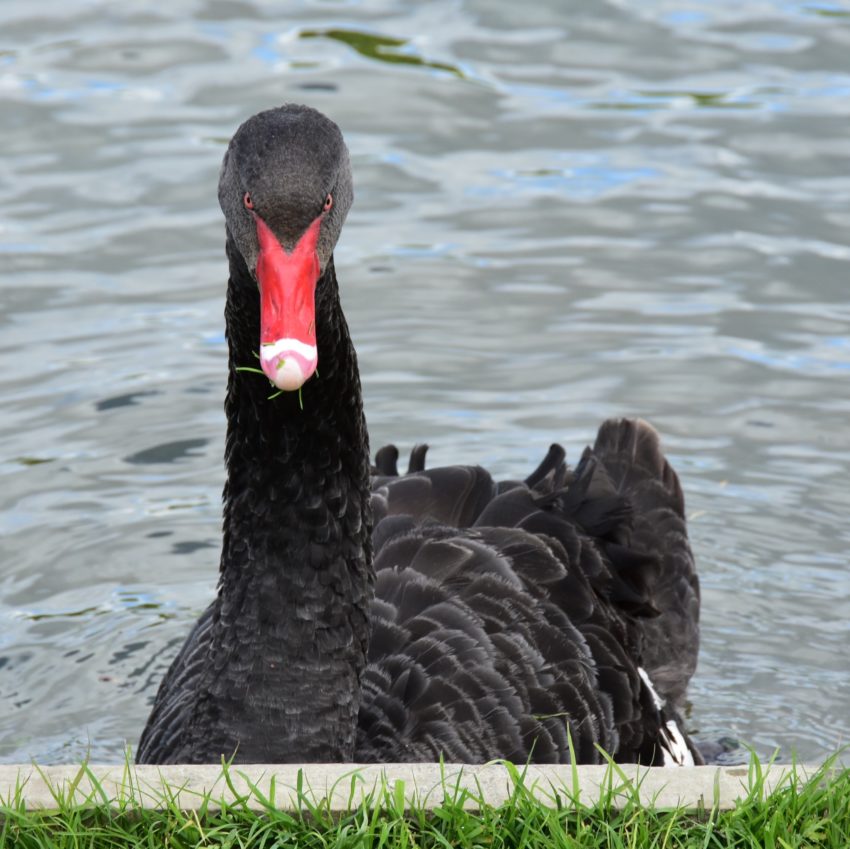 In October 2018 my adult children and I drove around New Zealand for an adventure. We fell in love with both the country and the people. I had a hard time pulling my kids on the plane to fly home – they wanted to stay forever. As we were walking through a city park in Christchurch we came upon a lake filled with an assortment of waterfowl, including a beautiful Black Swan. This is the first time I had seen a Black Swan, so I started taking pictures with my phone. Meanwhile, my daughter the photographer was splayed on the ground, at eye level with the swan, snapping photos with her Nikon. I gasped when I saw the detail she captured. Black Swans are native to Australia but have been introduced to New Zealand, Europe, and North America.

Did you know that the Queen of England owns all the Mute Swans on the River Thames around Windsor? Here’s a cute video showing how they count and mark the Queen’s swans. I follow a group on Facebook and Twitter called the Official Swan Watch UK. It’s a volunteer group that records data about swans in the UK. In the spring photographers post photos of nesting swans and newly hatched cygnets.

Mute Swans are not native to North America. They were imported from Europe to adorn large estates, city parks, and zoos. A friend of mine who lives in Michigan tells me they can be very aggressive. Maybe they prefer the River Thames over Lake Michigan.

I fell in love with swans when I visited the Tamarac National Wildlife Refuge in Minnesota. A large population of Trumpeter Swans live on the lakes in that area, and are a protected species. Trumpeters were once hunted for their meat and feathers and were considered almost extinct. In 1987 Tamarac brought Trumpeter Swan eggs from Alaska and incubated them in an effort to restore these birds to the area. Now there are more than 30 nesting pairs on the refuge. Trumpeter Swans are the largest waterfowl species in North America and have black bills with a tiny red line that makes it look like they are smiling.

Because of my fascination with Trumpeter Swans, I did some research and wrote a picture book about them called SPRING! TIME TO BUILD A NEST, A STORY ABOUT TRUMPETER SWANS. It’s a fun story based on how they actually build their nests. The illustrator, Rita Goldner, made each illustration a watercolor-like masterpiece. The book won first place in the 2019 Purple Dragonfly Book Award Contest for illustrations.

The e-book is a free Kindle download from Amazon for two days, May 1-2, 2020. Also, I have all my paperbacks on sale for $9.99 each when you order through my website.

Do you know why they are called Trumpeter Swans? After you download the e-book on a computer or tablet, scan the QR Code in the beginning of the book with a QR Code Reader App on your smartphone and listen to the swan’s call. Then let me know what you think.