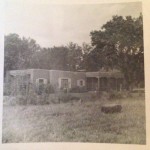 Autumn smells tickle wonderful memories of my childhood. My mother, father, brother, and I lived on a parcel of land near the Rio Grande in west Albuquerque. I know “down by the river” conjures a specific image by those who enjoyed the comedy of Chris Farley, rest his soul, but our cozy adobe, flat-roofed home was nestled under huge cottonwood trees. We referred to it as “the farm,” even though it wasn’t really a farm in the sense of boasting hundreds of acres of land. We had a stable with two horses, a mare and her foil, several banty chickens, three white ducks, and two Boxers – E, I, E, I, O. Two or three acres of alfalfa grew in our front yard. After the alfalfa had been cut, the bales were stacked, creating a huge haystack from which my brother, his friends, and I swung on a homemade tire and rope swing tied to a huge cottonwood that protected the hay. I loved the smells of the freshly harvested plant. The cottonwoods glowed with an aura of gorgeous yellow-gold in autumn, and with the cooler weather came winds that blew the leaves to the ground. In the 1950’s there were not many worries about air pollution or smoke inhalation, so the valley residents raked and burned the dry leaves. The aroma epitomizes Fall. Sounds also summon fond recollections of Fall. The constant cawing of crows always predicted cooler weather, and their calls remind me are of my early years on “the farm.”

Fast forward 50 years to our summer home in Minnesota. As I walk around the lake, I spy puffs of smoke along the shore where lake-home owners burn their fallen leaves. The aroma brings back memories of Albuquerque along the Rio Grande. In addition, the caws of the crows fill the air with noisy contentment. When we first moved into our community, it was still under development, and I had a nice view of the lake across the street beyond a vacant lot. I enjoyed my coffee on the side porch every morning, listening to the Loons call and the crows caw. One day while fixing my coffee, I heard a loud bang against the window. I thought it was a hunter’s stray bullet at first and was afraid to venture outside. My curiosity peaked, so I gingerly opened the door and walked around the house. I noticed a crow pushing himself in circles on the ground in our front yard. Oh my god, he flew into the window and now he’s injured. I ran back into the house and called a neighbor to see if there was a bird refuge anywhere close by where I could take him. In Phoenix I’ve taken sparrows and hummingbirds to a nearby bird refuge in a shoe box after they have flown into the window, stunning themselves. My neighbor didn’t know of any facility, and chalked me up as a crazy city woman having a panic attack. I went back outside to inspect the injured bird when one of the construction workers drove by in his truck. I flagged him down and showed him the poor little dazed creature. Without saying a word, he stomped on the crow’s head and flung his body over into the field across the street. I gasped and clasped my hands to my face, tears welling up in my eyes. He turned to me and laughed, “Obviously you didn’t grow up on a farm. Crows are just scavengers, and I just put him out of his misery.” “Well, Mister,” I thought to myself, “I actually did grow up on a farm! I was just trying to save a little creature’s life.” After my emotional breakdown inside the house, I researched crows on the Internet. I discovered that they are among the world’s most 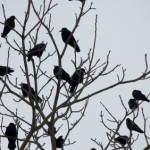 intelligent animals and have demonstrated the ability to distinguish individual humans by recognizing facial features, and are able to transmit information about bad humans. My only solace is to hope they will hunt this construction worker down, hover over his head, and poop on his neck for the rest of his life.