I should have known better! It’s my own fault! I went to the grocery store at 4:00 pm on a weekday. I avoid grocery shopping at all costs on the weekends 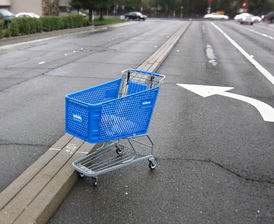 because of the crazies who pretend to work during the week and need to purchase their food and booze on the weekends; but you NEVER go grocery shopping at 4:00 pm on a Monday. For one thing, school gets out at 3:30. That means all the mothers and their two-year olds have just picked up little Johnny and Jane from school and decided to stop at Safeway to pick up some greasy, chemical-infused food for dinner. Or at the worst, those frozen fish sticks that have more breading than meat. Quick and easy – that’s what we do nowadays.

Let me describe for you the clientele at the market on a Monday afternoon at 4:00 pm. There is the frazzled mother and her screaming two-year old along with the big brother who just got out of school and wants nothing better to do than harass the younger sibling. None of them wants to be in the store at that moment. The toddler is vocalizing a high pitched alarm sound; the older brother is stashing a variety of chips and candy bars in the mom’s cart because he is starving; and the mother is daydreaming about dumping the kids at grandma’s house and going home to a glass of wine and a hot bubble bath.

Then there is the after-work crowd. The women are teetering on their 4-inch heels, drinking a latte, tugging at their miniskirts, and staring at their cell phones. What could be so important now – multi-million dollar clients or plans for the next happy hour? They definitely aren’t concentrating on buying the pre-packaged sushi or $4.99 roasted whole chicken they’re standing in front of.

And what about the over 70 crowd? Where did you come from? Did you nap all day and wake up to discover you are hungry? Or did the bridge game last all afternoon and you forgot you didn’t have any ice cream for dessert in the freezer? Or did you just leave from the 19th hole and decide you want to continue your beer buzz with a fresh six-pack?

Every grocery store should be equipped with courtesy signs, because the average grocery shopping Joe or Josephine doesn’t know what the word “courtesy” means. Here are some examples:

Next week I shall go grocery shopping on Wednesday at 10:00 am. It’s triple Monopoly Day then anyway!